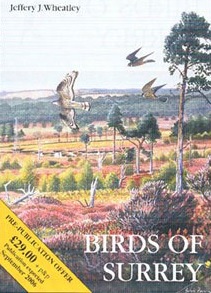 We are sorry to announce the death of Jeff Wheatley, a Club Vice-President and huge contributor in so many respects. Jeff was not only County Recorder from 1983 to 2010, but was also the Surrey Bird Report Editor until 1994. In addition, Jeff prepared all of the maps for the Surrey Bird Atlas 2007-2012 and hosted and co-ordinated all Records Committee meetings for many years. As well as this, Jeff was also the author of the authoritative Birds of Surrey which was published by the Club in 2007. A full obituary will be published in the next issue of Birding Surrey. The Committee’s thoughts go to Jeff’s family.